Following the tragic attacks of 11 September 2001, the United States was forced to completely revise the airport regulations which, as a consequence, have also influenced all other international airspace. The Transportation Security Administration (TSA) is the entity in charge of airport security in the United States and by those tragic events that occurred in 2001 that the same institution has decided to make it mandatory to open a few suitcases while checking all ‘ inside the terminals.
Being able to independently manage these practices and decide which and how much luggage to open, the agency thought it could guarantee a high level of security by immediately blocking the boarding of dangerous or non-permitted objects on aircraft. However, there were many complaints that not only concerned the privacy aspects more strictly subjective of the various passengers but, rather, the fact that the luggage of the travelers themselves were seriously damaged by the tools that the US customs agents used to tamper with the opening of the luggage. It was therefore necessary an innovation in this sense and above all a solution, which was realized through a new type of padlock applied to luggage that takes its name from the airport security agency that has become sadly famous for the damage done to luggage. 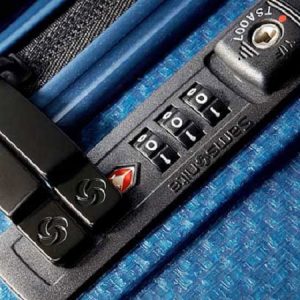 The closure is called, in fact, T.S.A. and it is associated to a combination according to the same system thanks to which the safes are opened and closed. So, if you want to open a TSA lock you will need to know the three numbers of the combination that make up the secret code of the same, which, however, will not be necessary for airport agents authorized to open the luggage of those who go to the United States and holding a universal key to open the aforementioned baggage.
This method allowed the agents not to damage the baggage and to open the suitcase completely automatically, check its contents and then close it again, leaving a notification card inside so that, once arrived at another American airport or any other international airport, the employees who will subsequently check the baggage will already know that this baggage has already been checked.
If you are, therefore, about to go to the United States it is absolutely necessary to get this kind of padlock that to date, to tell the truth, you can easily find on almost all the new baggage. Samsonite, for example, applies them in all models of rigid suitcase from the smallest model to the largest and also in some of its models of soft suitcases
Even Roncato and American Tourister have inserted TSA padlocks on the sides of their luggage due to the importance of air traffic in the United States of America.

How do you set the TSA lock combination?

When you buy a baggage with a TSA lock, the latter will have a series of unlock numbers set by default on the combination of 000. This means that before using it you will need to decide a combination that will allow you to open your baggage by remembering it. That’s how!
Take a pen and press the reset button. The key is located near the lock. You can not see it directly because it is usually set in a little hole
Keep the button pressed and set the desired combination (write it somewhere so you will not forget it).
Release the reset button.
Pull the sliders of the zipper of the suitcase and bring them near the lock
Put the slider pullers in the corresponding slots in the TSA case.
Press the appropriate side key. Now the combination is set.
The TSA closure, in addition to providing additional security to your luggage, will allow you to avoid any customs problems if you are traveling to the United States.

Previous StoryFlight delayed or canceled? No problem! The most important thing is to know how to pack
Next StoryThe women’s bag: the most loved accessory in the world has an ancient history